“A Diamond Is Forever”

Was there ever a time diamonds didn't inspire songs, violet-eyed movie stars, classic literature and all-around bling?  It seems like forever ago, but the DeBeers marketing campaign of the 20th century is why we associate diamonds with life’s biggest moments. Fortunately, they deserve the hype.  Formed under intense heat and pressure in small pockets of stability where the mantle of the earth meets the continental crust, diamond growth is a very slow process. These crystals capture glimpses (in the form of inclusions) of an unseen world from over a billion – to as young as a few hundred million – years ago. 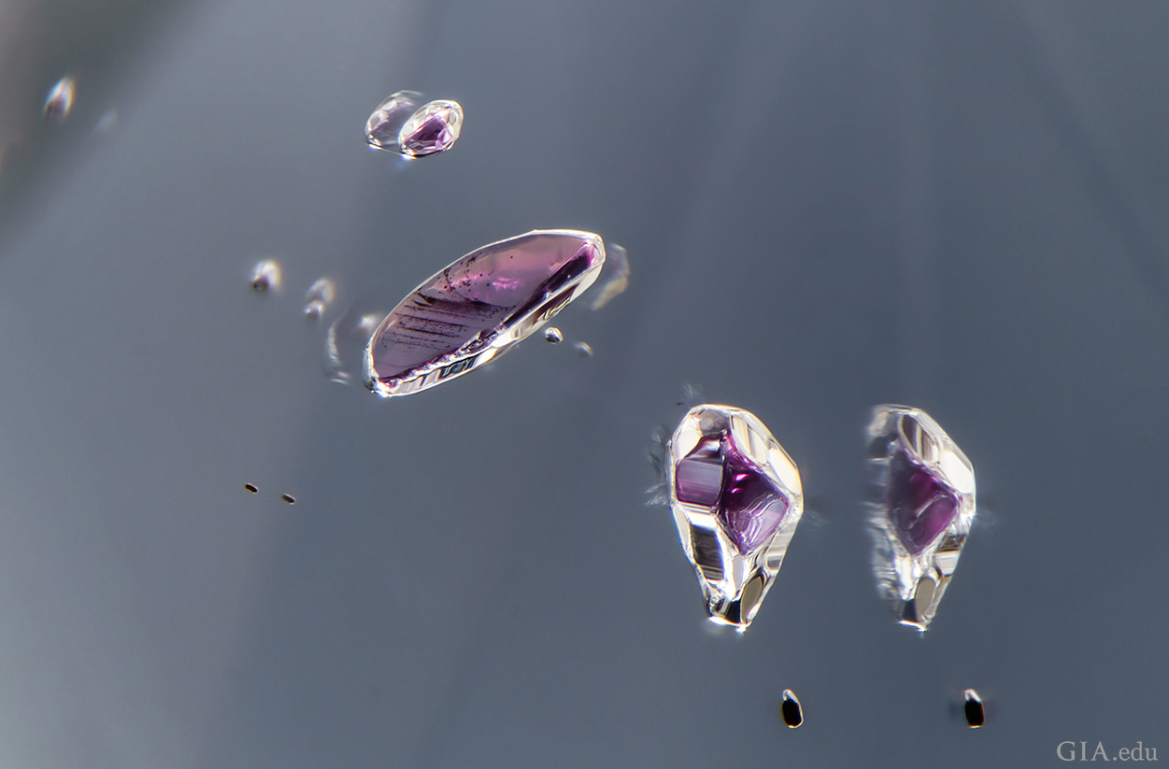 Their creation is exceptional – as is their delivery from the mantle to the crust of our planet. In the mantle, a highly pressurized and molten rock called Kimberlite presses through fissures in the crust – bringing diamonds with them. These eruptions are fast and furious. So quick, in fact, that the speed actually cools the diamonds as they travel – preserving their unique structure. A slow eruption of such intense heat would reduce them to a much more humble form of pure carbon: graphite.

Born and brought to the surface under circumstances both violent and volatile, diamond may be the hardest substance known to man, but the slightest variance during formation can destroy them.

When a diamond is finished by a master craftsman– someone who has trained for years in the art and science of diamond cutting– the result is a gem of exceptional brilliance, a mesmerizing beauty, and the strength to endure a lifetime of wear.

DeBeers had it right: a diamond is a near perfect symbol for an emotion as powerful as love.

Over the past century – the presentation of a diamond engagement ring has become an integral part of how couples celebrate and announce their commitment to one another to the world. Once a tradition of only the elite or ruling social class, the diamond engagement ring is now firmly linked to how we perceive the development of courtship and marriage – for every couple. 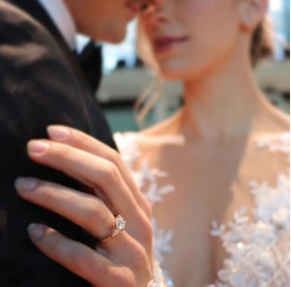 Diamonds are expensive. A ring with a relatively modest sized diamond can easily cost thousands of dollars. This factor, however, is part of what makes it such a precious symbol when one asks for another’s hand in marriage; gifting an item of high value is a way to convey affection, devotion, and commitment.

Engagement rings are not just symbols of love – but statements of fashion. While there are no rules about how much one should spend on an engagement ring, if the price to satisfy a one’s aesthetic preference is steeper than the depth of the pocket, some couples look to diamond simulants or enhanced natural diamonds to deliver the look  at a more accessible price point. Cubic Zirconia, Moissanite, and clarity enhanced natural diamonds are less costly options to natural, un-enhanced diamonds of similar perceived size. While these substitutes give an initially pleasing result, the problems with such stand-ins is that what they lack in price, they also lack in durability and stability.

Diamond Simulants (like Moissanite, Cubic Zirconia, YAG, Strontium Titanate, GGG) are never as hard as diamond. For a piece of jewelry meant to be worn everyday - durability is essential. Diamond simulants will show wear rather quickly – and can easily break – in a very short period of time. Not the best choice for a symbol of everlasting love. 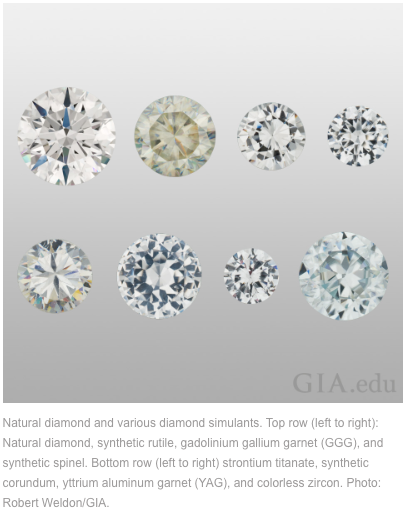 Natural Diamonds that have been treated with fillers to improve their clarity may have the strength of wear of diamond, but the treatment is unstable. Fillers can be damaged by heat and time – permanently ruining the enhanced appearance of the gem.

Today, a “new” alternative to natural diamond is becoming increasingly available – Lab Grown Diamonds. While diamonds have been synthesized since the 1950s, it has only been in the last decade that the process has reached a level of finesse that makes them both attractive and commercially viable to a mass market. Chemically identical and as durable as natural mined diamond, lab grown diamonds are most commonly grown from a miniscule diamond “seed” through processes involving High Pressure/High Temperature and/or Chemical Vapor Deposition and are ready for cutting within a few weeks or months.

While one would assume that a Lab-Grown diamond would be essentially “perfect” in regards to color, clarity, and cut – this is rarely the case.  Like other lab grown gemstones (Ruby, Sapphire, and Emeralds have been able to be grown in labs for over a century), lab-grown diamonds have inclusions related to their growth environment and manner of creation. The inclusions in HPHT lab grown diamonds can contain metal alloy from the flux solution in which they grow; this renders them magnetic (a quick diagnostic tool that can be used to distinguish a lab grown diamond from one mined of the Earth).  Lab-grown diamonds are rarely colorless out of the grown chamber – the undesirable presence of color removed through additional HPHT treatment of the material.

When shoppers consider a lab-grown diamond option over an natural diamond, they talk not only of price but of their perception of lab-grown diamonds being a more “Green” and ethical choice. The diamond mining industry is linked of deforestation, water usage, and land appropriation. These are historic truths and valid concerns. Consumer awareness over the impact of diamond mining on the environment has resulted in a positive change in the industry; miners have strict rules in place for replantation of flora and the recycling of materials to help conserve and regenerate the land after mining and ensure lasting quality of life and livelihood for mining communities.

Lab Grown diamonds made in the United States by companies committed to operating on renewable energy are “environmentally friendly”, but the majority of lab grown diamonds are created in China and India – where coal is the primary fuel source to power the energy intensive machines. This carbon footprint (compared to the emissions associated with earth-mined diamonds – the mining of one carat of which is six times less than that of a single passenger on a transcontinental flight) is not insignificant; the greater the demand for Lab-Grown diamonds means increased production and more fossil fuel emissions.

Ethics and the “human cost” of diamond mining are also a public concern – and they are as such to those involved in the natural diamond industry. Efforts to eliminate “Blood Diamonds” (the term used to describe diamonds mined in war zones and sold to finance insurgency) from entering the market - such as the Kimberly Process – have been implemented and enforced with legislation by the United States, Canada, and South Africa for over 15 years.

In 2019, the GIA announced that they would begin issuing reports for diamonds Origin. This previously impossible option has been made viable through a carefully managed block chain that tracks rough diamonds from mine to lab for analysis of each diamond crystal’s unique spectroscopic signature. This signature serves as a unique fingerprint - which can subsequently be matched to the finished and polished diamonds created from the rough crystal. Rather than making the service a costly addition to their grading service, the Gemological Institute of America is promoting the scheme at minimal extra cost – noting the importance of transparency in the diamond supply chain to ensure consumer peace-of-mind.

The diamond industry supports the livelihoods of over 10 million people world wide – many of who lived in poverty before working in the mining industry. The application of science and technology to the multi-lateral trade regime will ensure that the diamonds coming to market serve to boost the economic and social growth of nations rather than fostering harm.

So – is a lab Grown diamond the right choice for you? It depends.

If your are basing your decision primarily around environmental preservation and the well being of communities where diamonds are mined, it’s important to note that natural diamonds coming to market today have established safeguards in place to ensure the gems that reach the consumer come from sources where their acquisition is focused on doing good for communities and post mining ecologic recovery.

If you are basing your decision on price – a lab grown diamond is definitely better option than other substitutes for natural diamond. Being chemically and structurally diamond – a well-fashioned specimen will look better and wear better than a cubic zirconia or a moissanite ever could! Unlike fracture filled diamonds, lab grown diamonds are stable and will not change when exposed to heat or chemical stress as an clarity enhanced gem.

In regards to comparative price against a natural diamond – a lab grown diamond may also be an option for you. Just keep in mind that the market for lab Grown diamonds is developing quickly and should not be viewed as a financial “investment” the way one would an Earth-Mined Stone.

Be it a mined diamond or a Lab-Grown diamond – it’s important to work with a skilled Graduate Gemologist who understands the nuances of diamond quality. Lab-grown diamonds are currently assessed and priced along the same parameters of Natural diamonds in regards to the “four Cs” but their reports are not completely transparent and - like all diamonds - not an indicator of beauty in regards to cut (especially for fancy shapes).

Lab Grown Diamonds are marvels of science – the hardest substance known to Man, made by men (and women)!

Natural diamonds from the Earth are miracles of nature. Billions of years old, finite in number, prized for millennia, the source of legends, works of art and inspiration….THE inspiration that started it all! 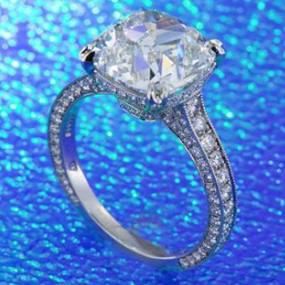 Which will you choose?

10% off your first order with subscription